APASA held its first general meeting yesterday, and we couldn’t be happier with how it went!

After a brief introduction of the officers and our mission, we started off with our first activity: the Asian-American Historical Timeline, an activity Bo, Oanh, and David were introduced to during the APIA U: Leadership Training program at the annual OCA National Convention this past summer.

Participants broke out into small groups and discussed historical events that affected the Asian-American community, which were pre-printed on adhesive labels. Examples of such events included the hate crime leading to the historic murder of Vincent Chin, the repeal of the Chinese Exclusion Act, the internment of Japanese Americans during WWII, and major milestones such as the first Asian-American Congressman. Attendees worked together to label these events as either a milestone, celebration, tragedy, or result of laws and policies.

Everyone also wrote three personal life events on Post-Its — one from their respective pasts, presents, and one they envision for the future. To put all of these events into perspective, each group then placed each of the adhesive labels with historic events, as well as their own Post-Its, onto a timeline, which ranged from 1750 to 2050. 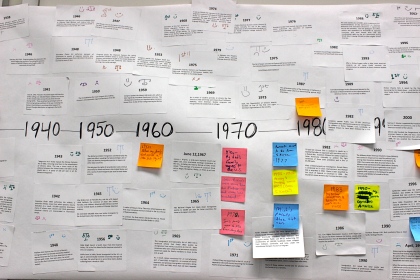 As John of Salisbury, who was later quoted by Isaac Newton, once said, “We are like dwarves sitting on the shoulders of giants. We see more … not because our sight is superior or because we are taller than they, but because they raise us up, and by their great stature add to ours.”

The Chinese Exclusion Act of 1882, its repeal in 1943, and the murder of Vincent Chin in 1982—these are but a few of many historical occurrences that have shaped the formation of a national Asian-American identity today. As APASA strives to bring awareness to Asian-American issues in hopes of advancing equality, it’s important to always keep in mind of what’s happened in the past in order to  understand how we got here ourselves.

After being introduced to these historical events, participants then shared their own personal experiences as Asian-Americans in a special activity involving colored streamers: 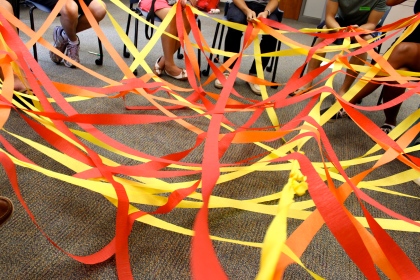 After hearing everyone’s experiences and thoughts, we are super excited for what’s in store for this school year. Everyone had such amazingly insightful and thoughtful things to share! Thank you to everyone who came out to our first meeting, and welcome to APASA! For those of you who couldn’t make it, we hope to see you soon at our next event! More details to come.